Description of the project which is using Google Maps technology for presenting the results of bird satellite tracking.

In July-August 2006 6 Lesser White fronted Geese (Anser erythropus) were marked with satellite transmitters North Star on the Putorana Plateau. This is a rare Palearctic goose species with not yet clearly known migratory routes. The initiator and main executor of the project on the Lesser White-fronts migration is the Goose, Swan and Duck Study Group of Northern Eurasia. At present the Study Group and Mining and Smelting Enterprise “Norilsk Nikel” together with the State Nature Reserve “Putoransky” are working on the project on the studies of migration and conservation of Lesser White-fronts breeding on the Putorana Plateau. In 2006, within the frames of this project, the expedition to the Dyupkun Lake (south-western Putorana Plateau) was carried out. About 100 Lesser White-front pairs are breeding at this tectonic lake.

Within the project the method for searching and capturing goose (Lesser White-fronts) was worked out and successfully used on the large tectonic lakes with vast area, up to 100 m depth and coast line up to several hundreds of kilometers long. Really, the method for “searching of a needle in a hay stock” has been worked out. The team of only 4 people successfully used this method. In 2006 6 local breeding Lesser White-fronts were successfully captured and marked with satellite transmitters. Birds were marked since 24.07.2006 to 02.08.2006, during post-breeding moult. All marked birds were captured from the boat on the open water area of the lake. The signals of the transmitters, working over 100 days, have already revealed the main migratory direction of birds: from the Putorana Plateau birds fly south-westwards (over West Siberian depression to Kazakhstan).

Argos-tools software was used on all stages for processing of the original telemetry data.. 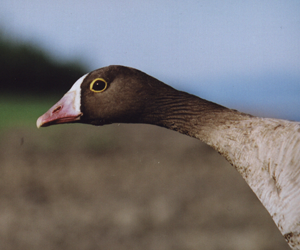 Sites and dates of marking birds

The references to interactive maps are given below in the same order.

The results of Lesser White-front satellite telemetry are available on the basis of map service Google Maps. Maps are automatically updated with receiving the data on bird movements. Map basement is the Landsat data, available via Google Maps. The maps allow navigation (zoom in, zoom out, scrolling) (more on Google Maps (rus)).

Choose one of the references below to go to the interactive schemes of movements of the certain bird (see colors on the schematic map below).

Attention – loading of location data might take some time, while the map cannot be not seen. Only locations of 0-3 grades are presented on the schemes (the information on location classes of Argos data (rus)).

No additional software is needed for viewing the maps. The operation efficiency of maps is checked out in browsers Internet Explorer, versions 6 and higher (in versions 5 and lesser the efficiency is not guaranteed), Mozilla Firefox, Opera 8.x - 9.x.

General scheme of movements of marked Lesser White-fronted Geese, each color is for a certain bird. The detailed schemes of movements can be seen as the interactive maps based on Google Maps, and also as a more detailed map. 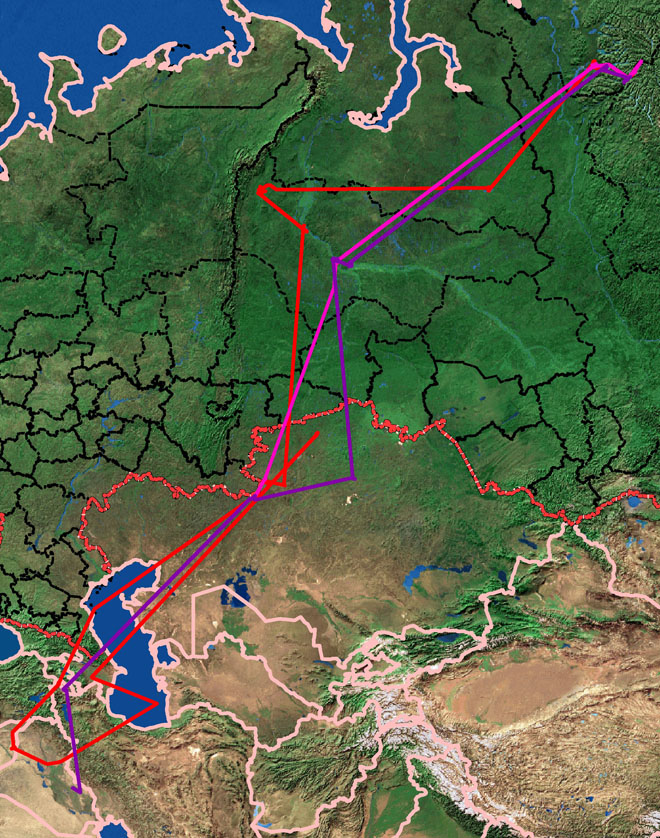 At present the satellite telemetry is being received only from one bird - 3H (references are above; the other maps are not updated any more due to absence of movements).

After long staging at the border between Kazakhstan and Orenburg Province of Russia, the birds 3H and 0H flew over the Caspian Sea to the border between Iran and Nakhichevan Province of Azerbaijan, where they still stayed since early November not far from each other. 0H all the time was moving along the coasts of the large water reservoir in northern Iran (since 4.11 untill the end of December), 01.01.2007 it moved to southern Iraq to Mesopotamia. Last telemetry from this bird recieved on 13.01.07 from densely populated region of Kut-El-Amara city in Tigr valley. It is equally possible that it died or transmitter is out of order.

3H stayed for a long time on the junction of the border between Azerbaijan, Armenia, Turkey and Iran, at daytime in the Araks River valley, at night in the mountains of Iran. Between 30.11 and 03.12 the latter bird flew southward along the border between Syria and Iraq, where it stayed until the end of January (the Euphrates River valley). During this period, transmitters battery must have depleted, as the locations became rare and low quality. From 19.02 until 16.03 the bird stayed in Naryn-Chai river valey to the south of Mnt. Karatepe in eastern Iraq, ocasionally moving to nearby mountains. After 20.03 the bird started to move to nesting area. Location from Caspian Sea (to the south of Ogurchinsky island) could be a mistake, though it has a class 0, as the previous location A was obtained from the same wintering area 2.5 hours ago (this location was considered to be a mistaken one). Since March, 27 the bird is located in Kura river valey in Central Azerbajan.

Birds 4Z и 5B – the transmitters are likely damaged. Locations are absent since early September; however there was a location of A grade of the bird 4Z from the Pura and Taz rivers watershed on 9 October, but it is likely an error.

The bird 6B died between 19 and 23.08, but the transmitter works: The locations of high grades (1-3) are transmitted almost from the same point at Dyupkun Lake up till now.

Initiator and executor of the project - Goose, Swan and Duck Study Group of Northern Eurasia.
The project is supported by Norilsk Nikel Enterprise.
The leader of the project and expedition is A.A. Romanov (State Nature Reserve "Putoransky") with the help of Bird Ringing Centre of Russia . Participants of the expedition: S.V. Rupasov, E.A. Zhuravlev, S.V.Golubev.

Rendering vector data with Mapnik without direct access to the storage

Geoprocessing with SEXTANTE for QGIS

If you've found a typo or bug, select a related piece of text and hit Ctrl+Enter