Extracting data from a single raster (or several rasters) using a set of vector point objects is a fairly common task. This is necessary when we want to construct the spectral profiles, quantify the accuracy of raster data, inspect changes or prepare training datasets for classification, etc.

Here is already a similar tool, on our website, but it was developed for ArcView and has several limitations.

To use this tool you need our python script, Python 2.5 or higher and GDAL library with Python bindings.

The simplest way to get all necessary components under OS Windows is to use OSGeo4W installer:

If you run Linux, then install all necessary packages using your package manager. In Ubuntu/Debian you need to install python-gdal package.

There is no graphical interface for the script and it runs in console mode at the moment. It takes several arguments as input and output

Important! You must remember that the field name in the DBF format is limited to 10 characters, hence long names will be truncated.

Here is result of the data extraction from 6-bands Landsat fragment (raster data type is Byte, raster filename — clearcuts_174016.tiff), opened in QGIS. For the initial two fields (id, taxon) new fields clearcut_1 - clearcut_6 (see, that filed names are truncated due to the DBF format limitations) with corresponding values were added.\ 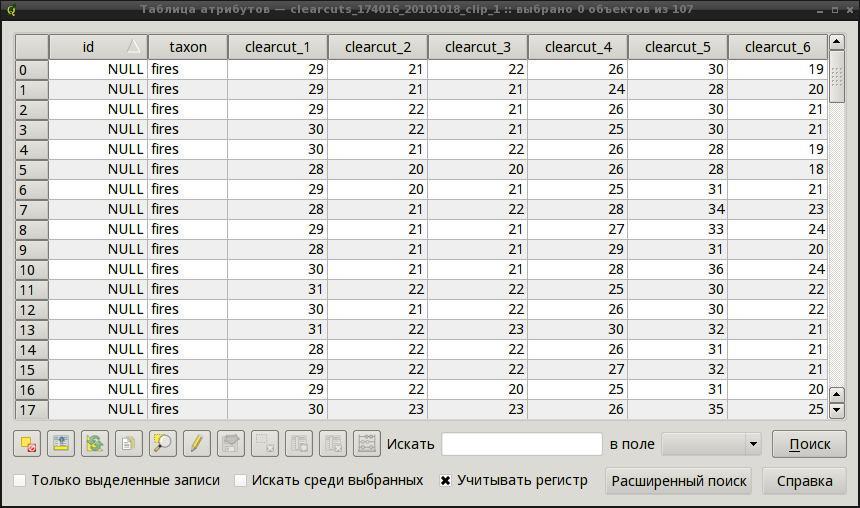 Extract values from raster after.tiff using points from shapefile poi.shp (script and files are in the same directory)

Extract values from raster after.tiff using points from shapefile poi2.shp, raster and vector are in different CRS (so we use -r switch to enable reprojection)

Extact values from all rasters in directory using points from shapefile points.shp